GET YOUR MOTORHOME HIRE QUOTE

The Lake District is the UK’s most popular national park. Situated in Cumbria, in the North West of England, it is famous for it’s lakes, forests and fells, and in 2017 was officially designated as a UNESCO World Heritage Site.

Hugely popular among tourists, with over 15 million visitors a year, it is the place to go, whether you’re looking for a peaceful retreat, or an action-packed adventure holiday.

However you prefer to spend your time during your visit you can be sure that you will be spoilt for choice when it comes to scenic walks, cycle trails, swinging in trees, or splashing about.

When it comes to places to stay you really are spoilt for choice. Choose between staying near the coast at Ravenglass, pitching on the shores of Lake Windermere at Braithewaite Fold, or neatly nestled between glorious green fells at Eskdale. 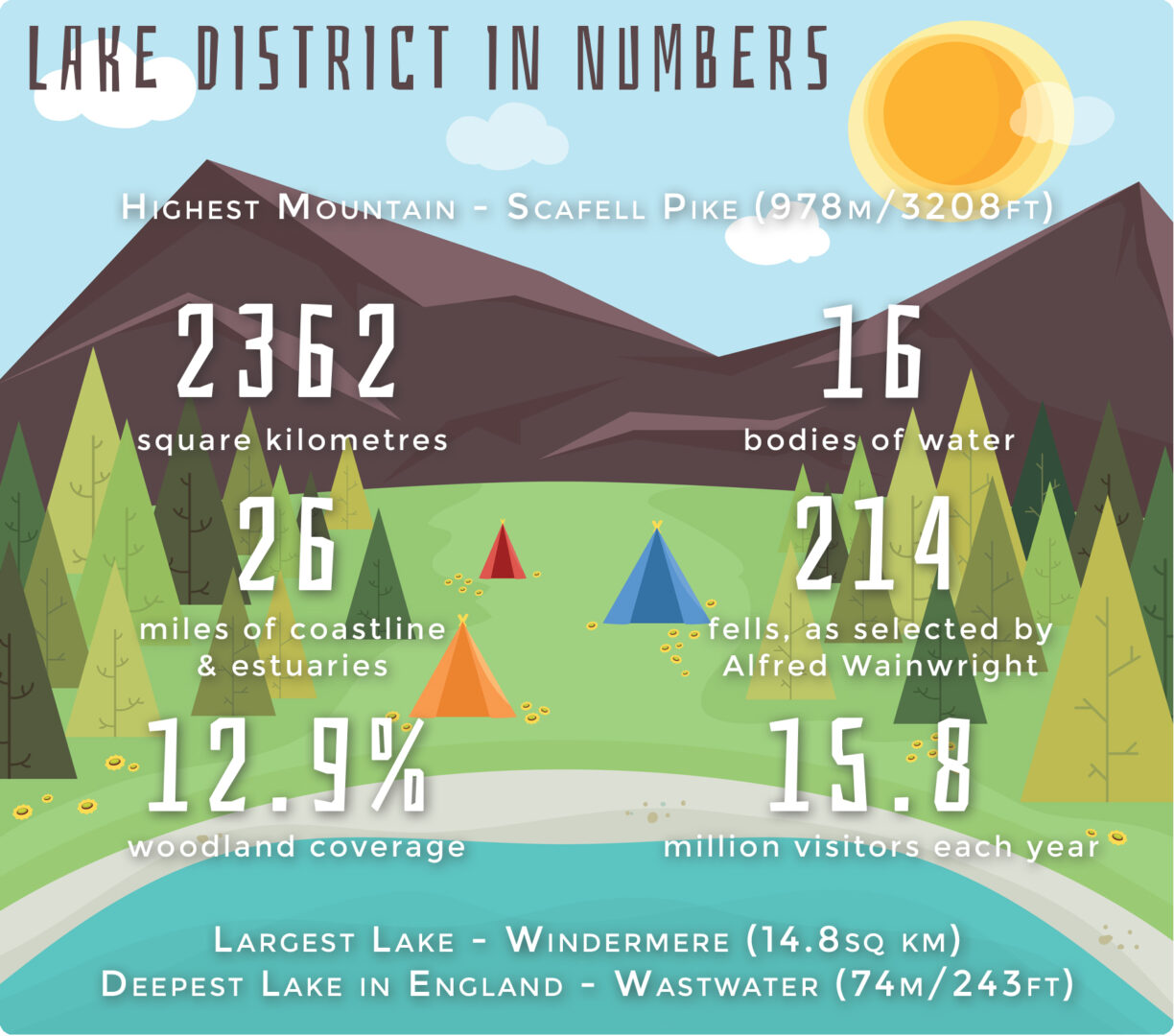 Beatrix Potter drew much of her inspiration from Hill Top, near Sawrey. When she died in 1943, at the age of 77, she left almost all of her property to the National Trust, along with instructions about how it should be looked after and shown. So what you see when you visit the house is the real thing, and exactly how she would have seen it all those years ago.

Scafell Pike is the highest mountain in England, standing at a mammoth 978 metres (3,208ft). Each year thousands of people take on the ascent, but the climb should not be underestimated, as it’s a tough, steep hike.
As well as being England’s highest mountain it is also the highest war memorial, given to the National Trust in memory of those who died in WW1 so that people would have the freedom to enjoy the mountains.

Ever been on a lovely walk, roaming the countryside, but felt as if something was missing? Of course you have, and that something is…an alpaca!

Alpacaly Ever After offer guided private alpaca walks around the stunning grounds of the Lingholm Estate along the shores of the famous Derwent Water. Get to know the alpacas up close, take them for a paddle in the lake, meet the herd, take part in feeding time, and take as many selfies as you like!

William Wordsworth was a major English Romantic poet, born in 1770 in Wordsworth House in Cockermouth. He was Britain’s poet laureate from 1843 until his death in April 1850.
Presented as their bustling family home, including costumed servants, you will get to experience what it was like to live in the 1770s. Relax in the summerhouse on Wordsworth’s famous terrace, walk and listen to his poetry and discover the nature that inspired his work.

Based in Keswick, and offers both indoor and outdoor activities for groups and families. The list of activities to choose from is extensive and includes rock climbing, kayaking, orienteering and ghyll scrambling!

An annual open water swimming challenge. After ten years at Low Wood Bay, it has now moved to Brockhole on Windermere to accommodate the almost 10,000 participants. Take part yourself or watch from the banks for what is sure to be a great weekend (5 to 7 June 2020).

Want to woo someone, but are not sure where to take them? I know a cracking owl sanctuary. Impress them with your knowledge of avian conservation, and you’re on to a winner.