GET YOUR MOTORHOME HIRE QUOTE

Have you ever had Gower Salt Marsh Lamb?

Quick question for you: where in Britain is the very first area of 0utstanding Natural Beauty? Give yourself a big Welsh pat on the back if you said the Gower Peninsula.

For 63 years now, the Gower has been officially outstanding, natural and beautiful. It’s Wales, so you expect castles (more than anywhere per square mile) and sheep (three for every person), but what the Gower gives you most of are beaches. “Breathtaking” doesn’t do them justice. 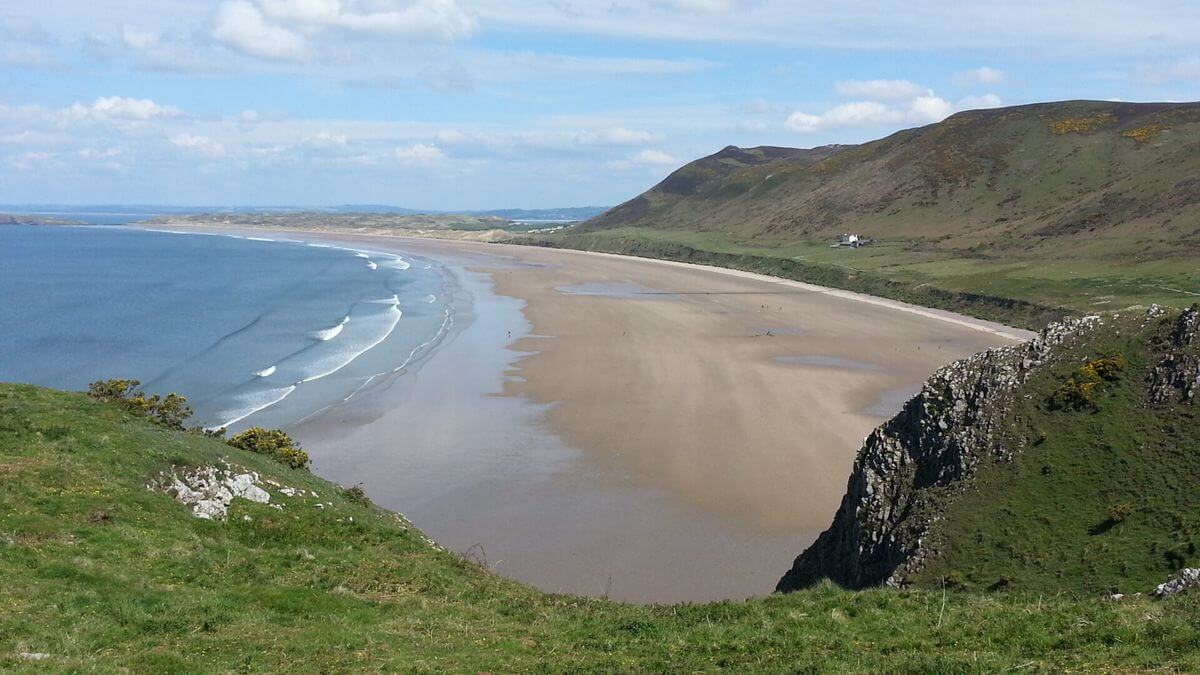 If you like sand, surf and sun (okay, with wind and rain sometimes…)  the Gower is the place to go. And unlike Scotland, or North Wales or even Cornwall, it’s easy and quick to get to from southern England.

From LandCruise’s base just outside Chichester we knocked off the 220 miles in a Swift Escape 614 motorhome in four and a bit hours. Since they scrapped the Severn Crossing toll last year, South Wales is even free to enter these days. 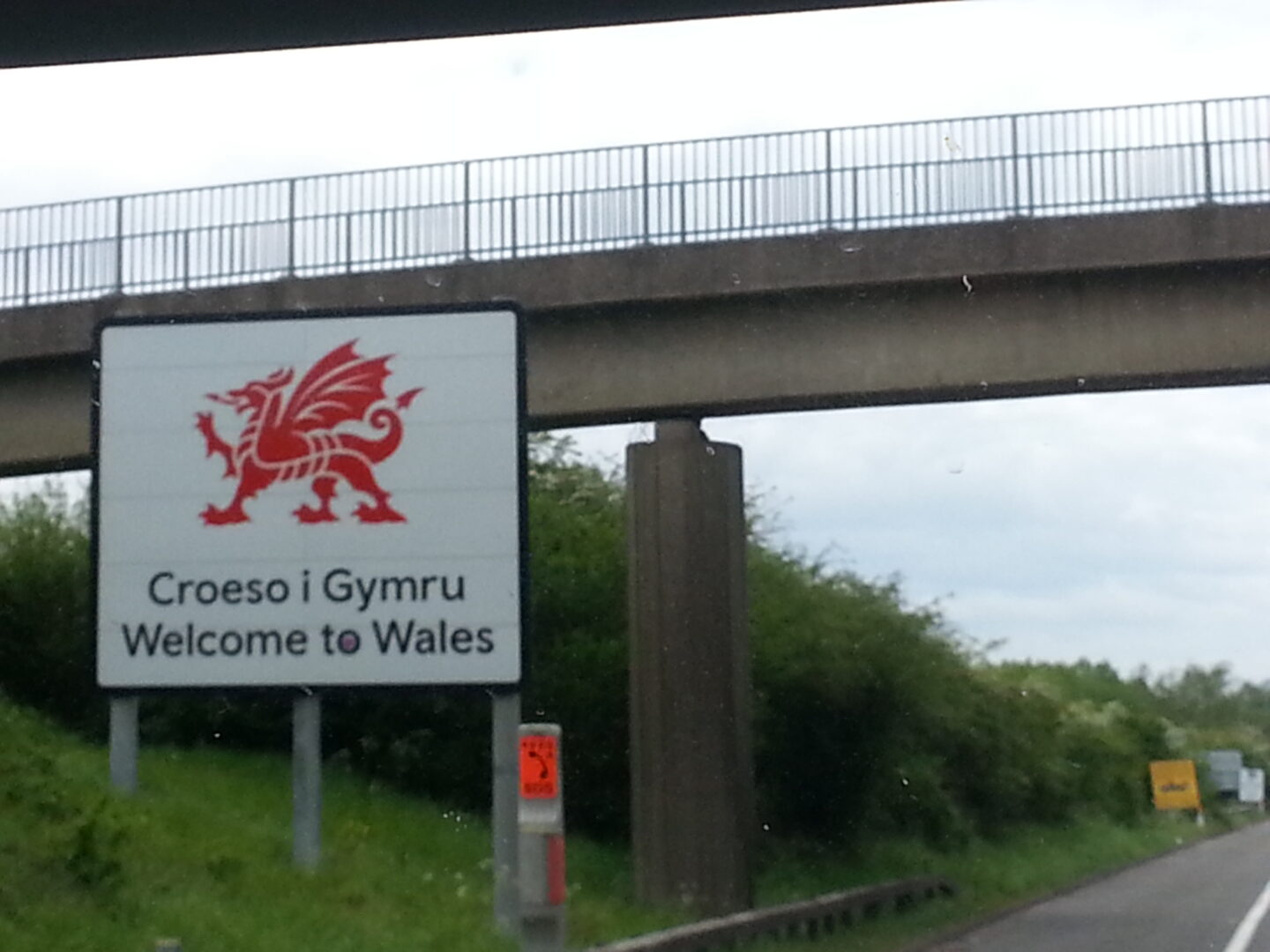 At around 70 square miles the Gower is about half the size of the Isle of Wight. Which is a relevant comparison because with water to the south, water to the west and water to the north, this sticky-out bit of Glamorgan just above the Bristol Channel has very much the feeling of an island to it – always a good head start for a holiday. 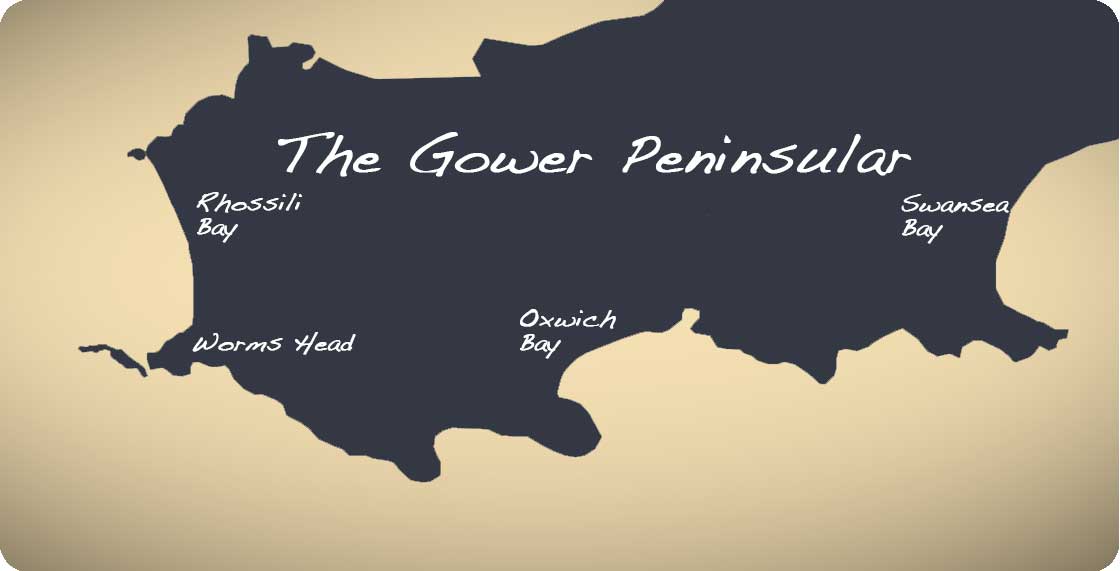 To the east of the Gower is Swansea, and it is surprising just how close Wales’ second city and its suburbs are to the Gower. One moment you are crawling through retail parks, the next you are on a deserted beach watching the sun go down over an expanse of sand that seems to stretch to the horizon. 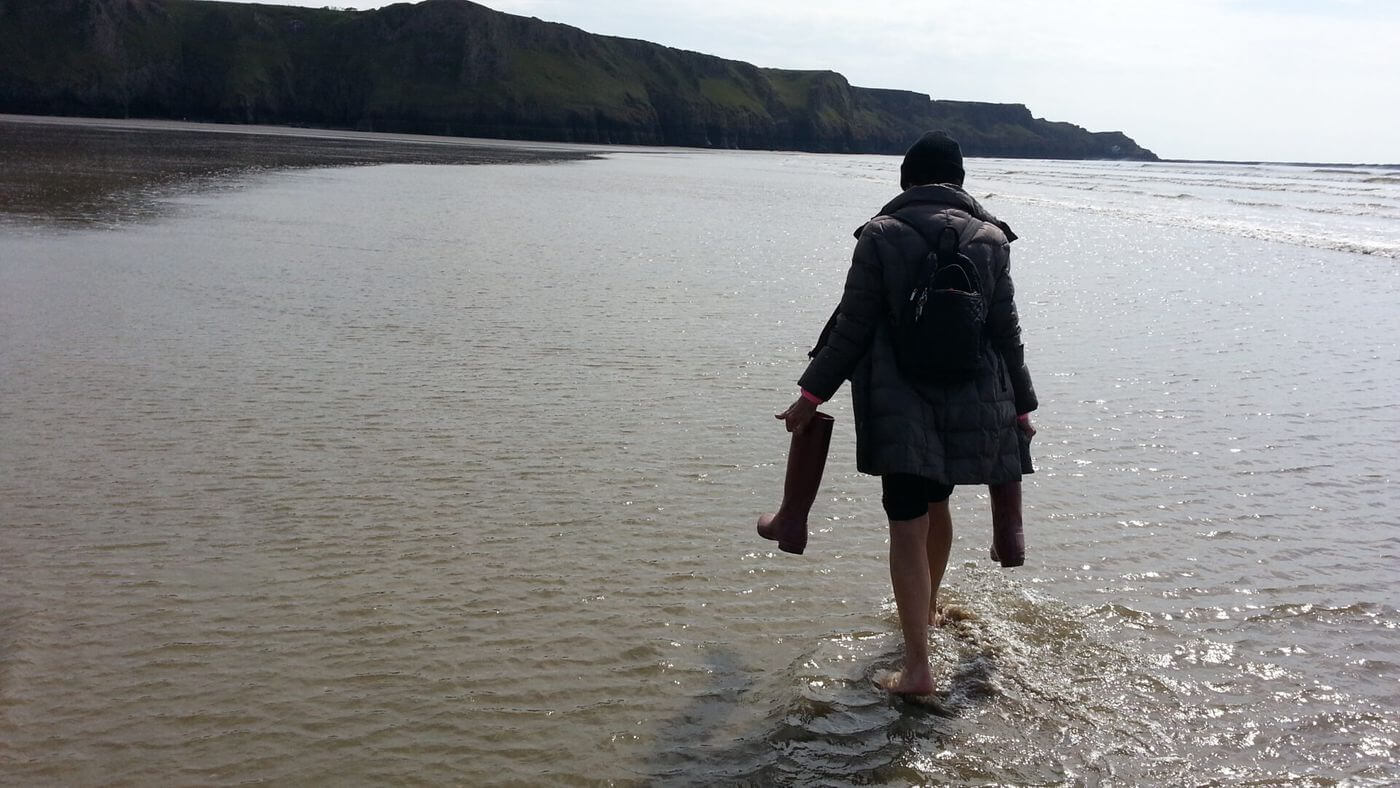 How to get to the Gower?

The trick is to get to the M4 by the easiest route. From Chichester, we opted for the M27 to Southampton then the A36 to Salisbury and Bath. But getting through Bath can be slow and it’s probably quicker, if more boring, to hit the M4 earlier, say at Newbury or even Reading.

Once on the M4 you stay on the motorway across the (free) Second Severn Crossing to Newport (the tunnel can be very busy), on to Cardiff, past Port Talbot (you can’t miss the steelworks) and then take the exit for Swansea. 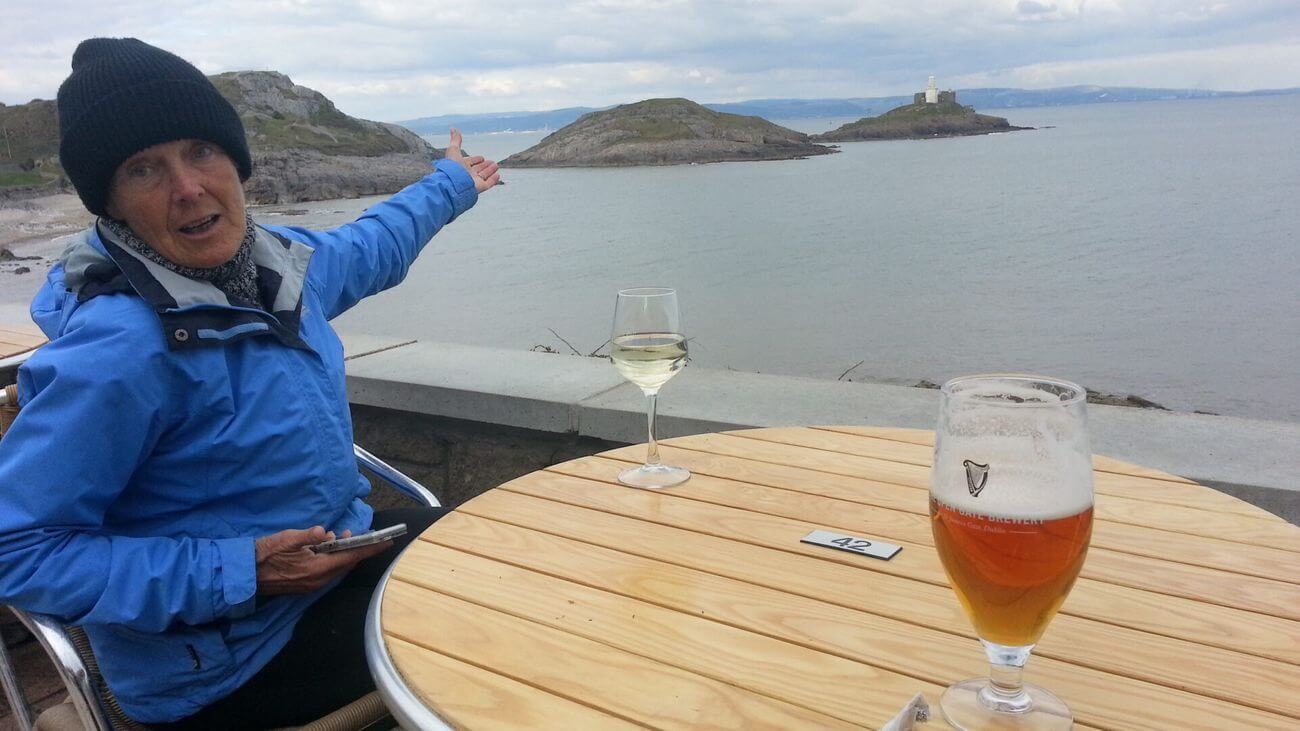 Following signs for the Gower, the first holiday place you get to is the Mumbles. Named after the French word for breasts – allegedly after a pair of suggestively shaped islands off the coast, so Google says anyway.

The Mumbles is a spread-out town along the western side of the expansive Swansea Bay, all of which is linked up by a wide, smooth and flat promenade. It goes for miles, and with its variety of attractions and eateries is a popular spot with walkers, runners and cyclists. One of the eateries is the Gower Seafood Hut whose cooked-to-order chili prawns (£6.50) are totally scrumptious. 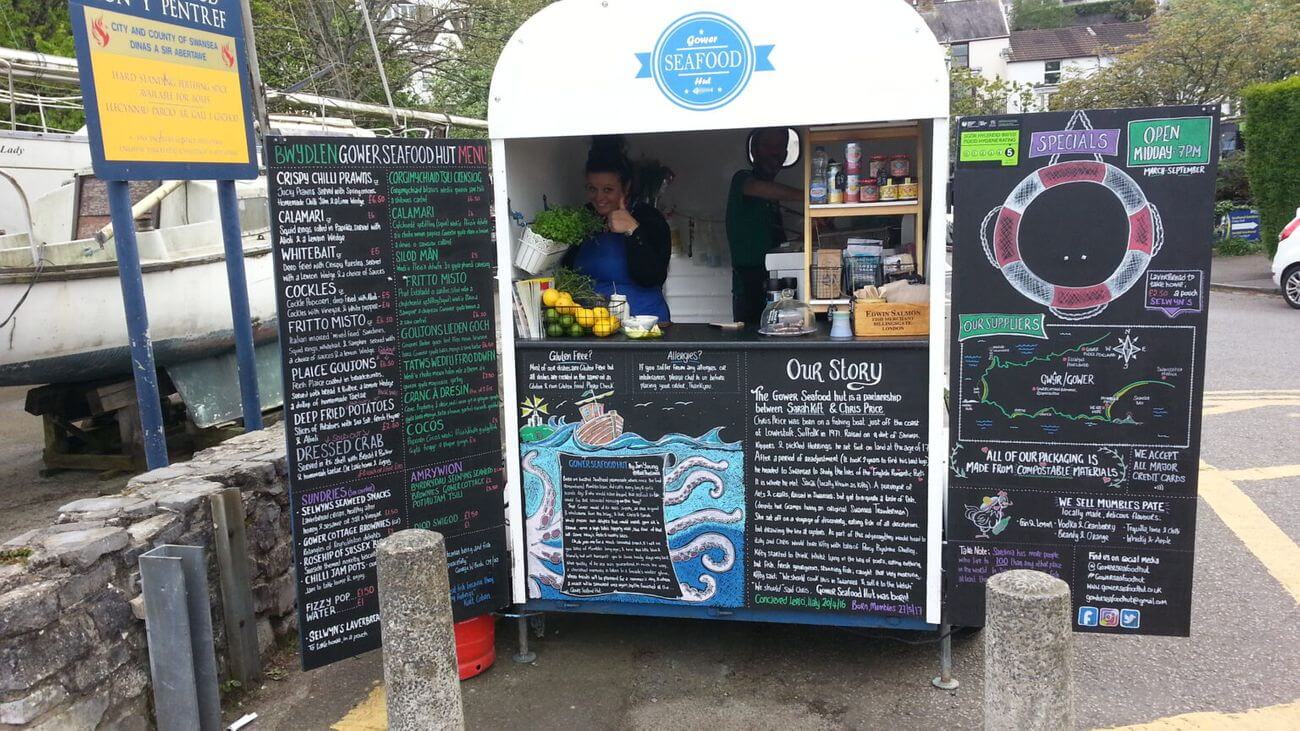 A mile or so further on is Bracelet Bay where suddenly the roads get narrower and peter out. Options for overnighting here are limited, so we just parked up in the big car park overlooking the water and the bosomy islands, pulled the blinds down and hid…

The car park signs here don’t scream “NO OVERNIGHT CAMPING” as they often do, instead there is just some small print about Swansea city regulations not currently allowing overnight parking. Someone covering their behind, we thought. We were not alone in assuming it to be tacit nod in the motorhomer’s direction. 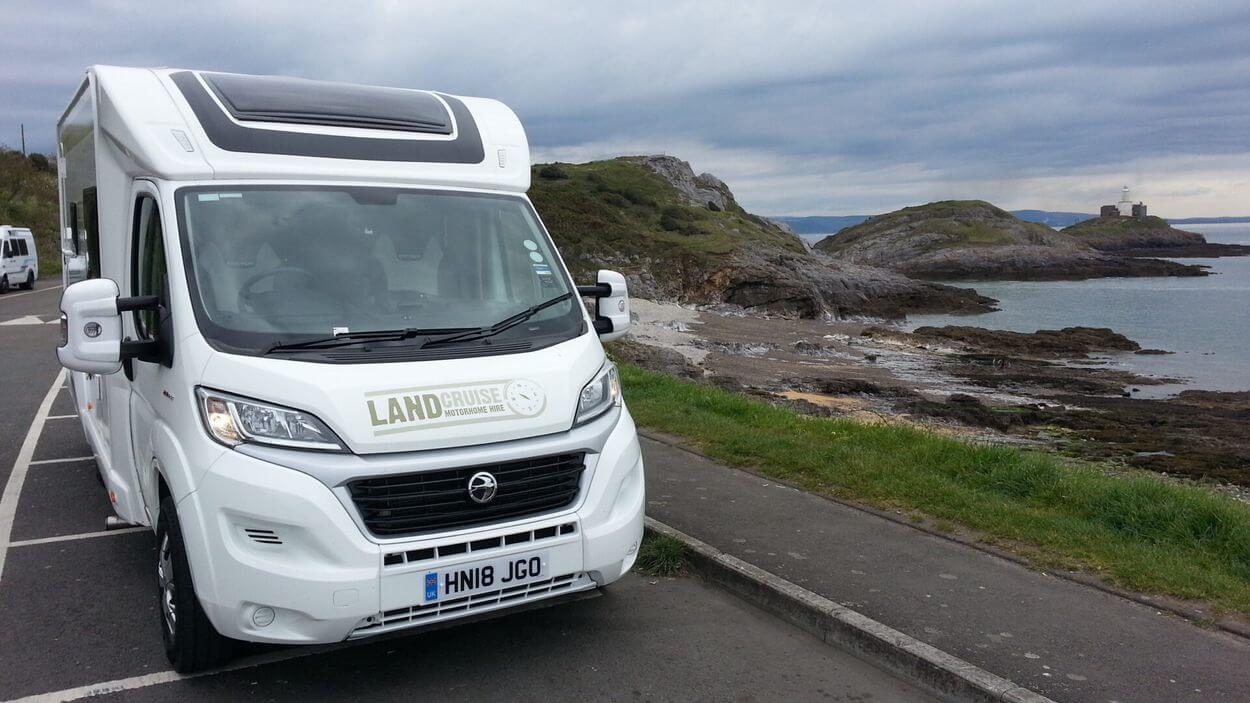 We spent £6 on a car park ticket, rather more than that in local independent businesses, took our rubbish and waste away with us and were gone by 9 the next morning. Perfect! The only downside was the local yoofs who arrived in their hot hatches for late-night burnouts. Nothing at all in the Swansea regs about that…

The Swift Escape 614 is 6.72m long and, on the Land Cruise fleet, ranks as a low-profile, mid-range motorhome. Even so, judging by narrow Mumbles roads, I worried we might soon be too big for the tarmac.

In fact the farther west on the Gower you go the better the roads get. They are not just well surfaced – West Sussex roads are rubbish in comparison ­–­ but the main routes are generally wide enough, with passing places where they are not.

As long as you are careful and always ready to give way on the smaller roads, there’s not a problem. We quickly found driving the length and breadth of this “island” was one of the delights of being on the Gower, though it is worth bearing in mind our Welsh break was mid-week in early May; an August bank holiday would be rather different.

The roads link up small villages and settlements dotted around the coast and in the country, which morphs from rolling, sheep-filled hills to open moorland with wild Welsh ponies. By road, everything seems an easy 20 minutes away from everything else and there’s no shortage of great pubs along the way. Recommended are The Ship in Port Eynon and the King Arthur in Reynoldson. 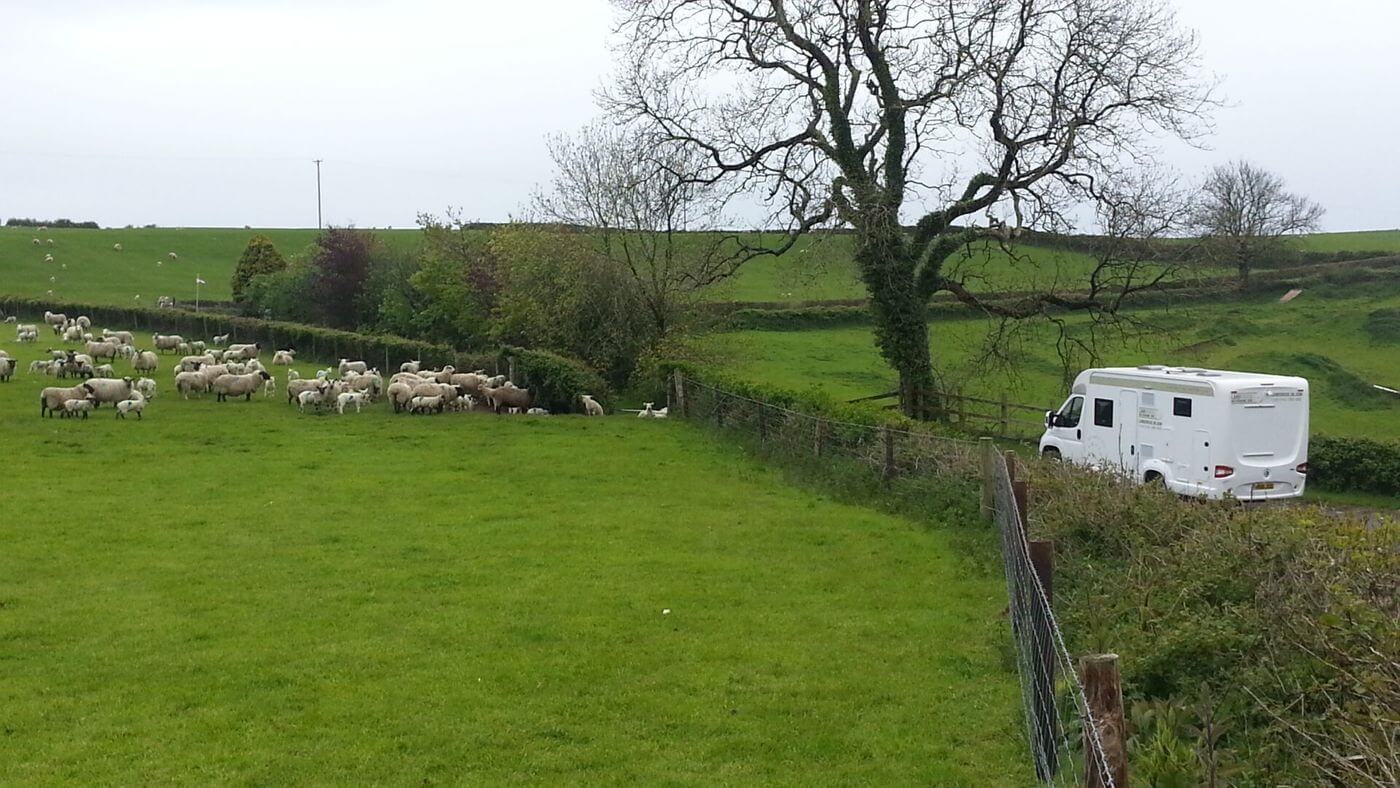 The road from the Mumbles took us to Oxwich Bay and the one park we had booked up in advance: Nicholaston Farm Caravan and Camping. What a top place this is, for £30 a night with all services provided – including what must be the best free wifi on the Gower.

Given a choice of pitches, we plumped for a grassy paddock overlooking the spectacular sweep of the bay and a pleasant 10-minute walk through woods and over sand dunes to the huge, totally unspoiled beach. Really helpful people, a useful shop/café and plenty of space between pitches, no wonder we stayed here two nights. 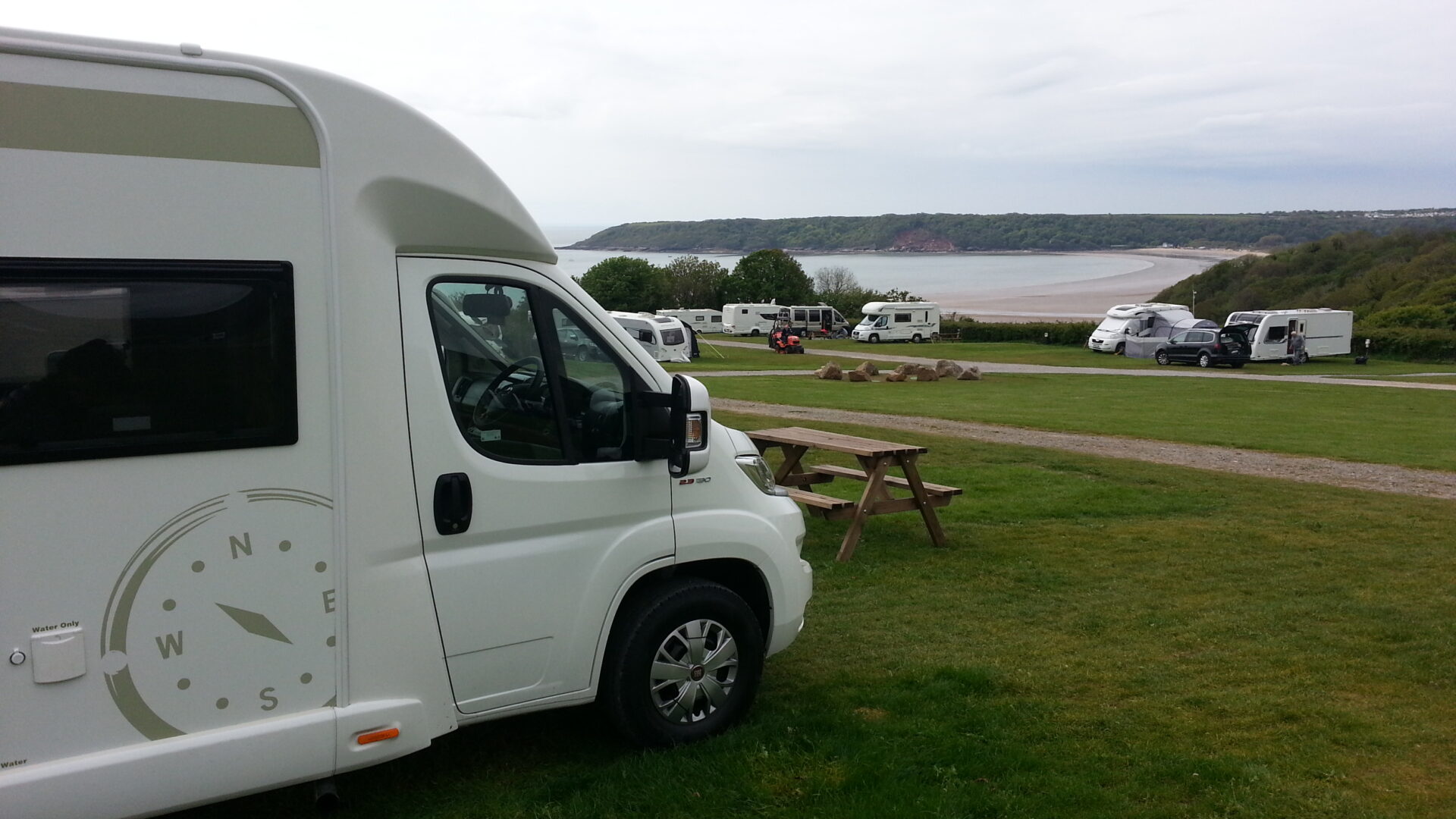 Things to do at Oxwich Bay?

Walk the sands, hire a paddleboard or kayak from the watersports centre, explore the rock pools, picnic in the dunes, walk the coastal path and check out the lovely church and old castle. Or you could just enjoy lunch at the Oxwich Bay Hotel (very good, and a fine pint of Doom Bar) or, for those on larger budgets, splash out in the posh beach-front restaurant next door.

Plenty to do then…so why were most people wandering around with a bucket and packet of cooking salt? Clams is the answer and the pencil-shaped razor clams in particular.

As the locals were pleased to explain, you scour the sands for telltale air bubbles, sprinkle on the salt and wait for the razor clam to rise out of its sandy hole in the mistaken belief the tide has come in. Whereupon of course you grab it, pop it in your bucket and take it home and gently cook it in a pan with some white wine, thyme and garlic. Seafood doesn’t get fresher than that. 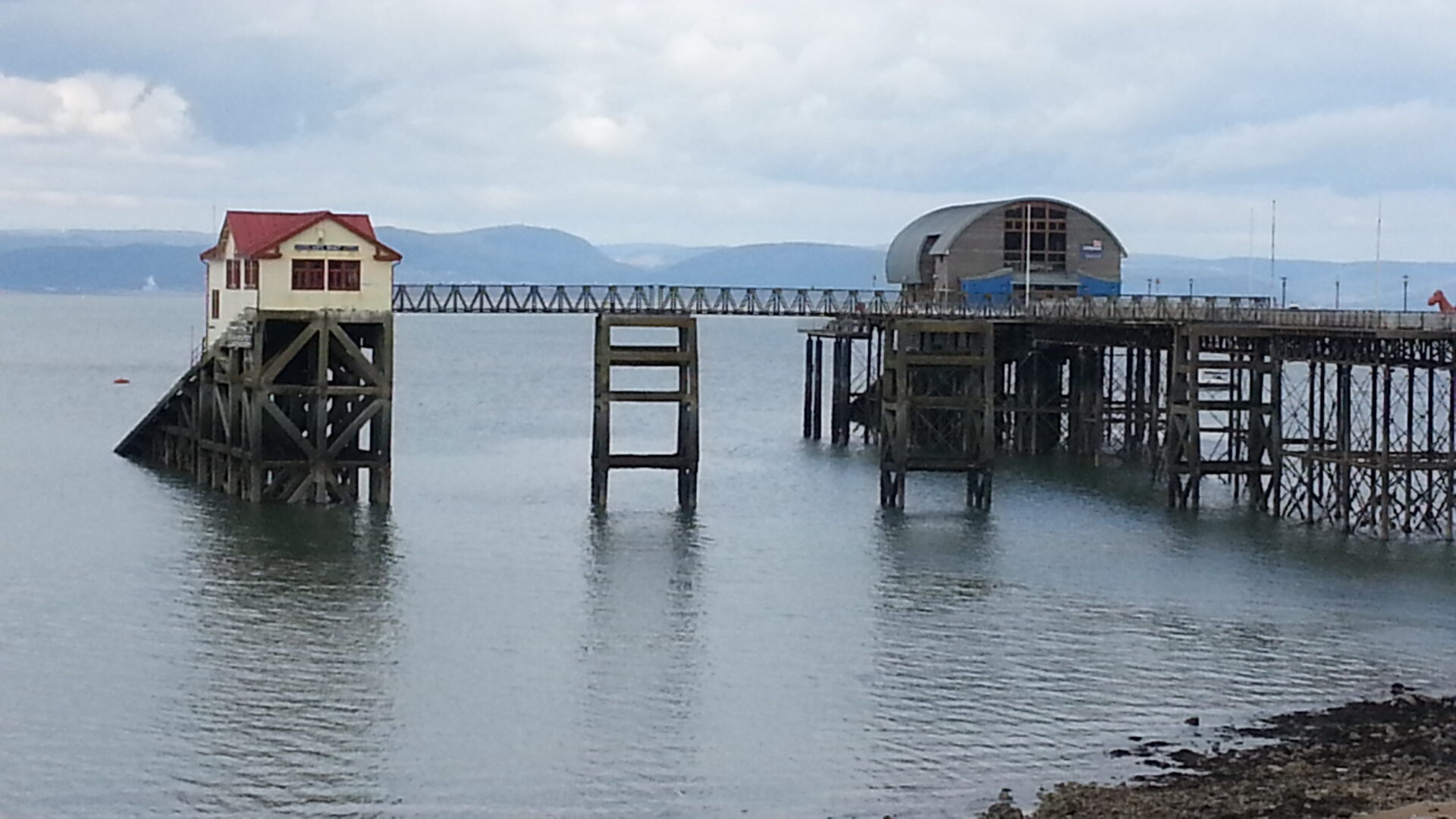 The queen of the Gower’s beaches is Rhosili. It is an awesome, three-mile arc of sand where sets of waves roll in – gently, when we were there, but sometimes with the power to make this among the country’s top surfing beaches. 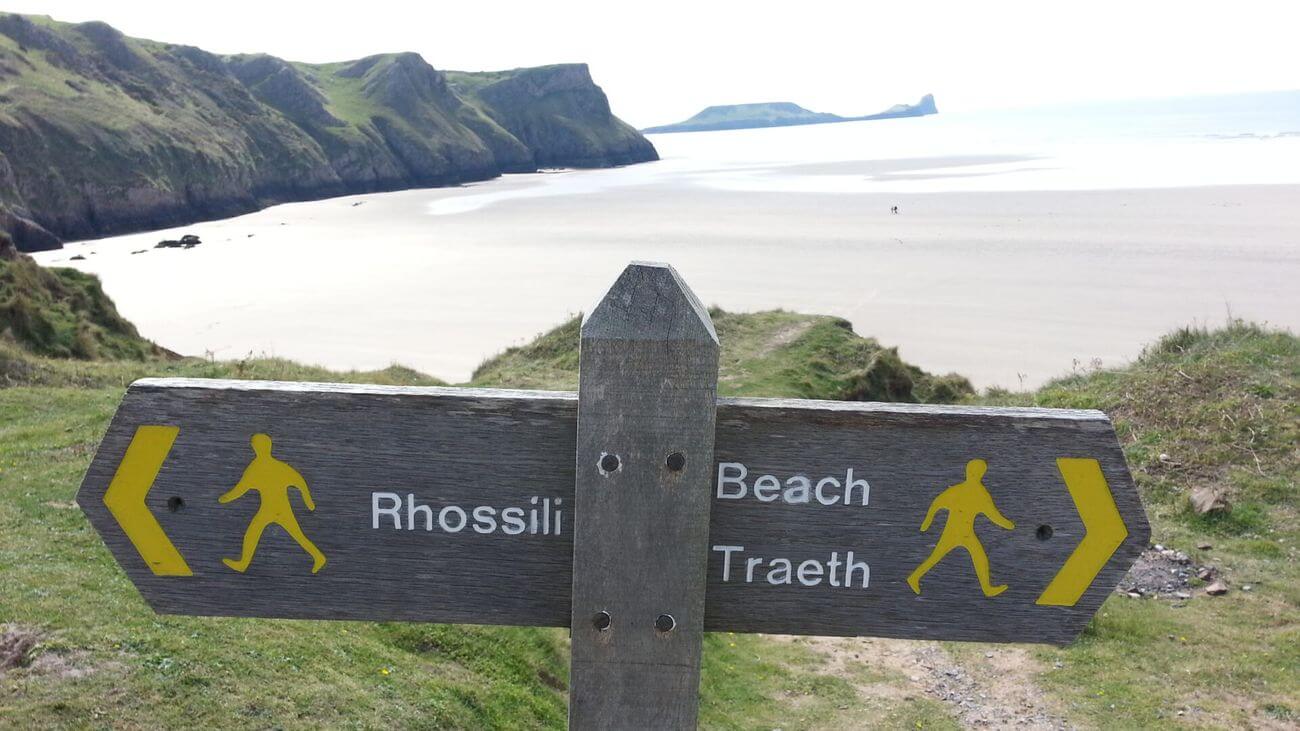 You do not have to be a surfer dude to enjoy this National Trust-run wonder, for the walking here is wonderful, either around the bay or, most spectacularly, out to the tidal island of Worm’s Head.

There’s no overnighting, but there’s plenty of room to park up for a day’s exploring, with a great cup of coffee from the van in the car park, plus a café and hotel nearby too.

Other must-visits on the Gower?

Too much for our five days, but we did manage a visit to the Gower’s answer to Stonehenge, a 25-tonne lump of precariously balanced rock known as Arthur’s Stone in a place called Cefn Bryn. It’s more impressive – and just a little spooky – than it sounds, especially when you learn it is actually a Neolithic burial chamber dating back 4500 years. 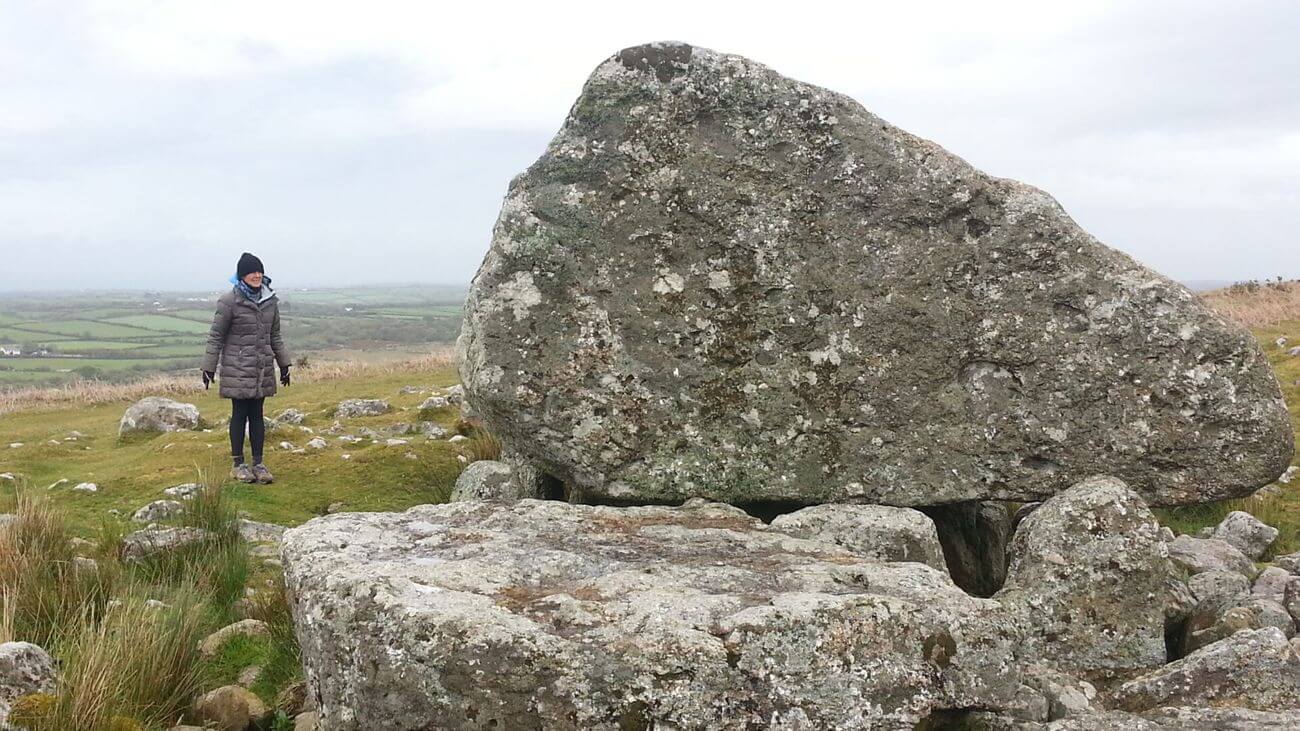 Incidentally, unlike Stonehenge, there are no fences here, let alone a visitor centre, just an open expanse of moorland with a little rough ground that makes do as a car park – which, out of season at least, is just perfect for wild camping. In our travels around the Gower, we found that wild camping – plus parking up in a pub car park or on a farmer’s field after you asked first of course – were all very real options.

The other place we visited was, inevitably, a castle. A pretty good one, more a fortified manor house than a castellated fortress perhaps, but even so there’s enough of Woebly Castle left intact to give a revealing look at life in the 14th century. 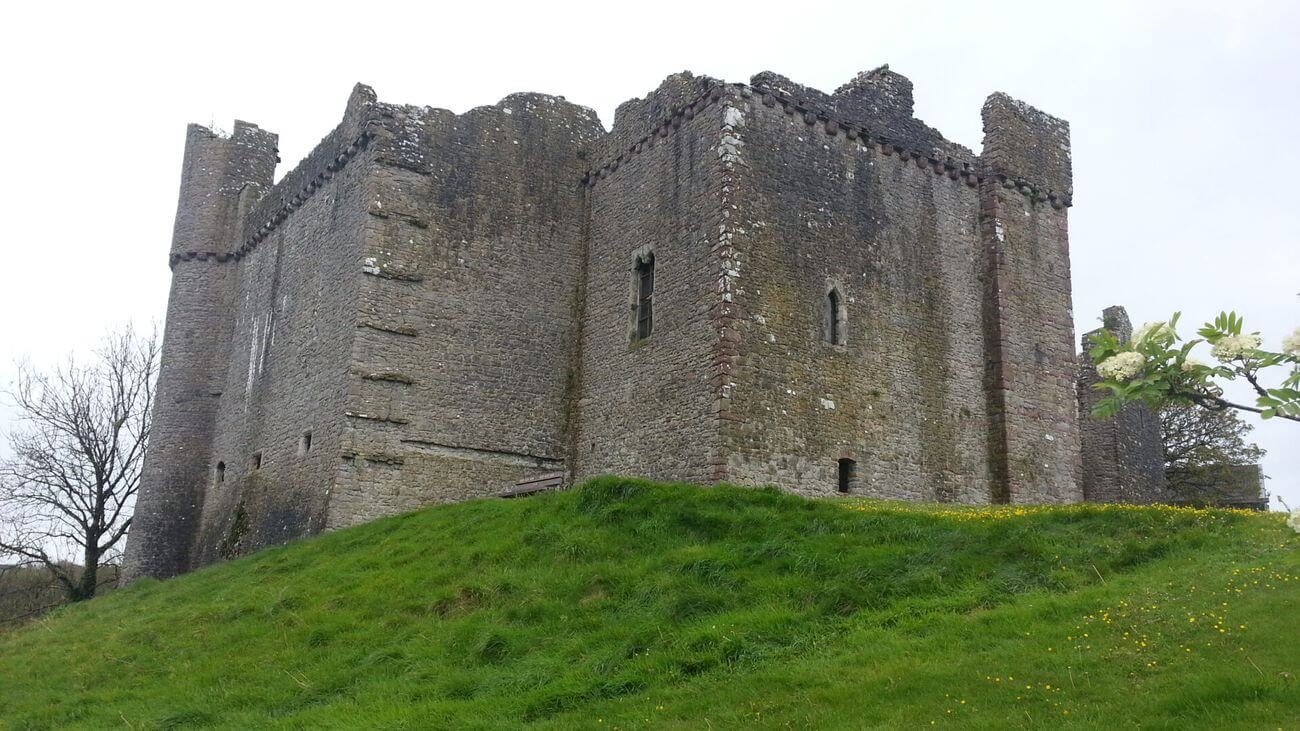 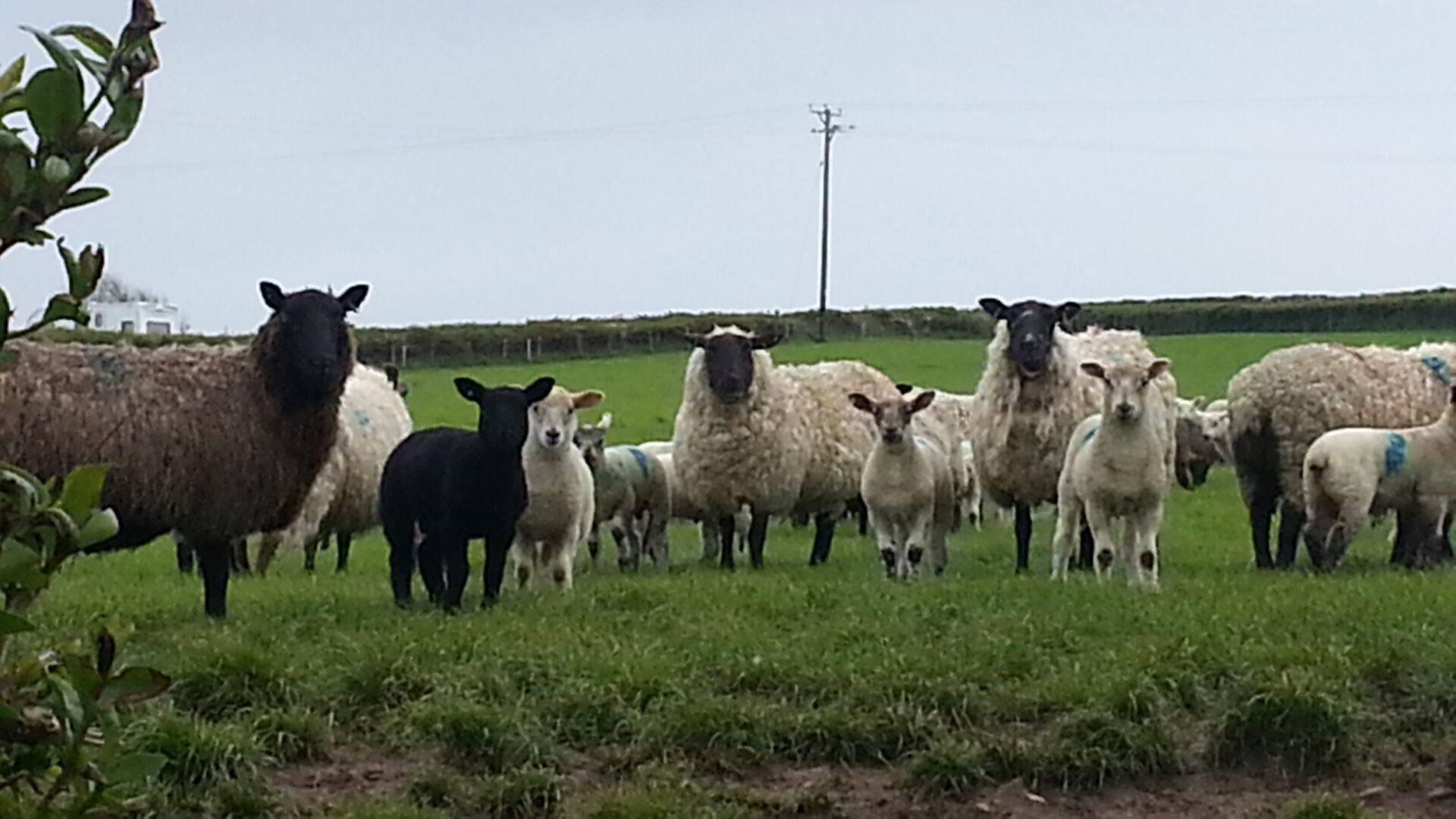 Camping sites often have a way with words and “No unsupervised young people” on a welcome sign is not the best, err, welcome. Know what they mean though. In the event Oxwich Camping was truly welcoming, and no unsupervised young people anywhere. In fact we were virtually alone on this beautifully wooded and green site, complete with swimming pool. We’d like to see what this place is like in high summer, but in May and for £20 a night it suited us very well.

If you go, say hello to the awesome dogs in the office. 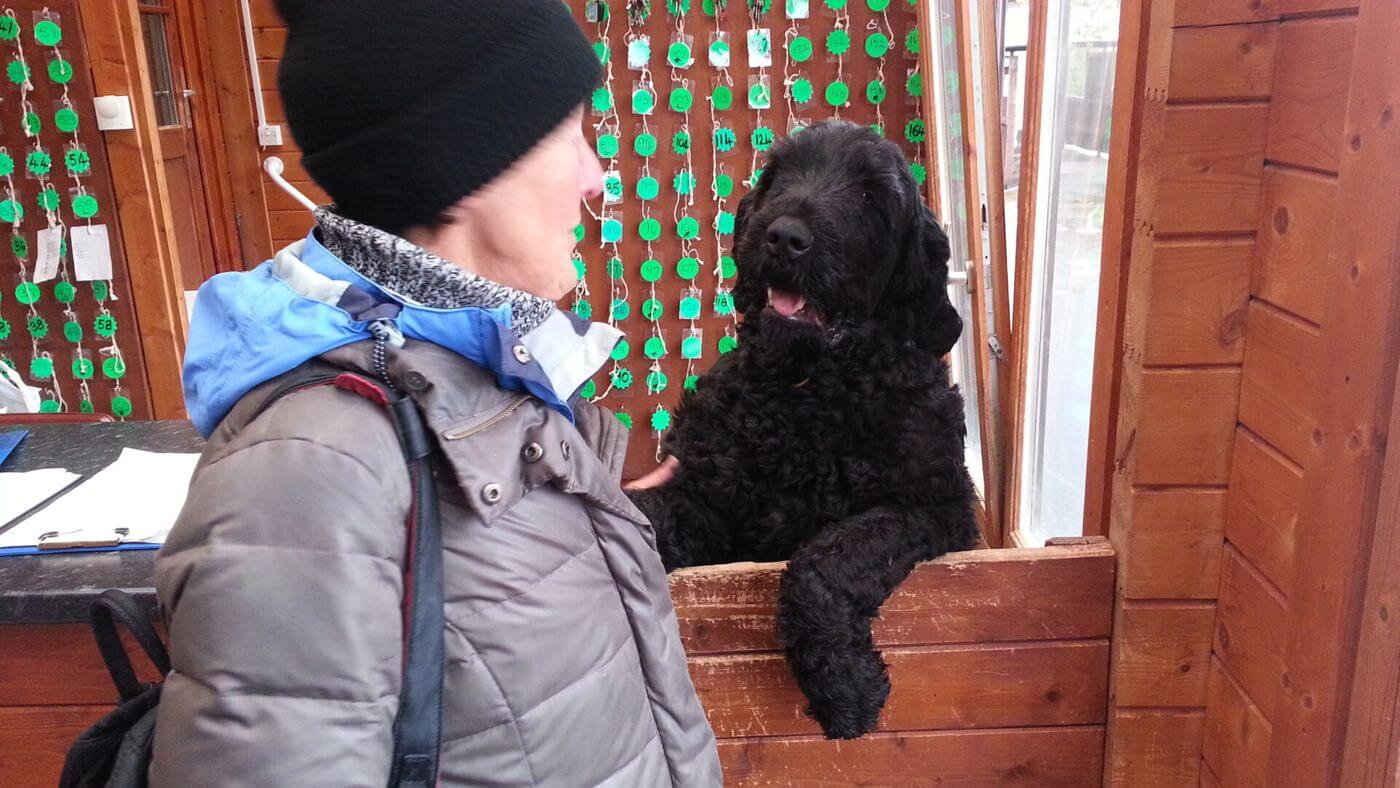 For our last night we parked up in a quiet corner of Port Eynon, famous for its fish and chips and lovely beach, and easy staggering distance from The Ship pub and our goodbye-Gower supper. Probably not strictly allowed, but, again, no problems at all, reflecting the motorhome-friendly attitude in this part of the world – in low season at least. 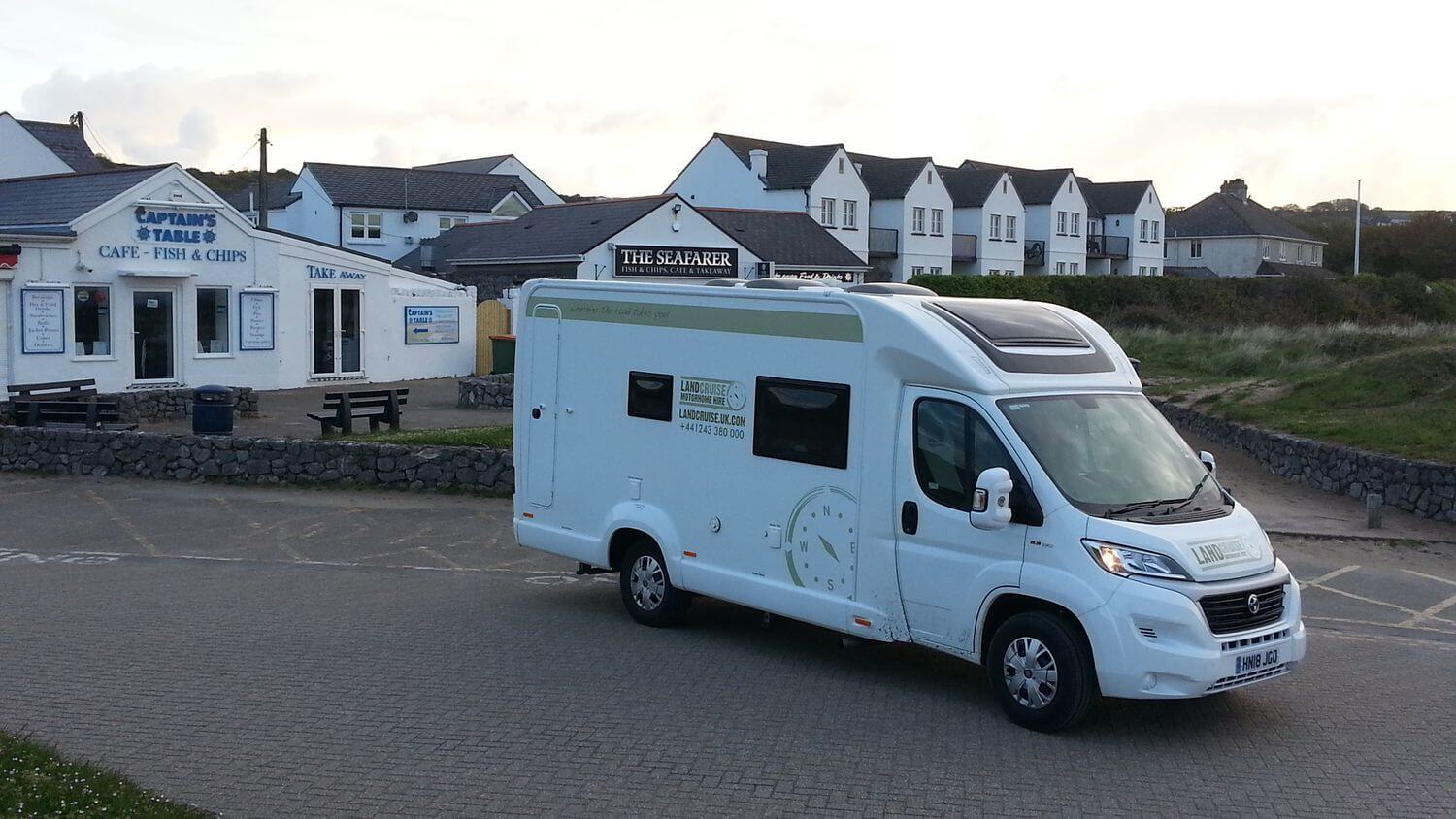 We left soon after 6am and were back in Chi for 11, the Swift Escape completing our 480-mile Welsh adventure with aplomb and a diesel-fuelled 27.4mpg – pretty good for an automatic and mostly 65-70mph motorway driving. Fiat Ducatos are good things to drive. 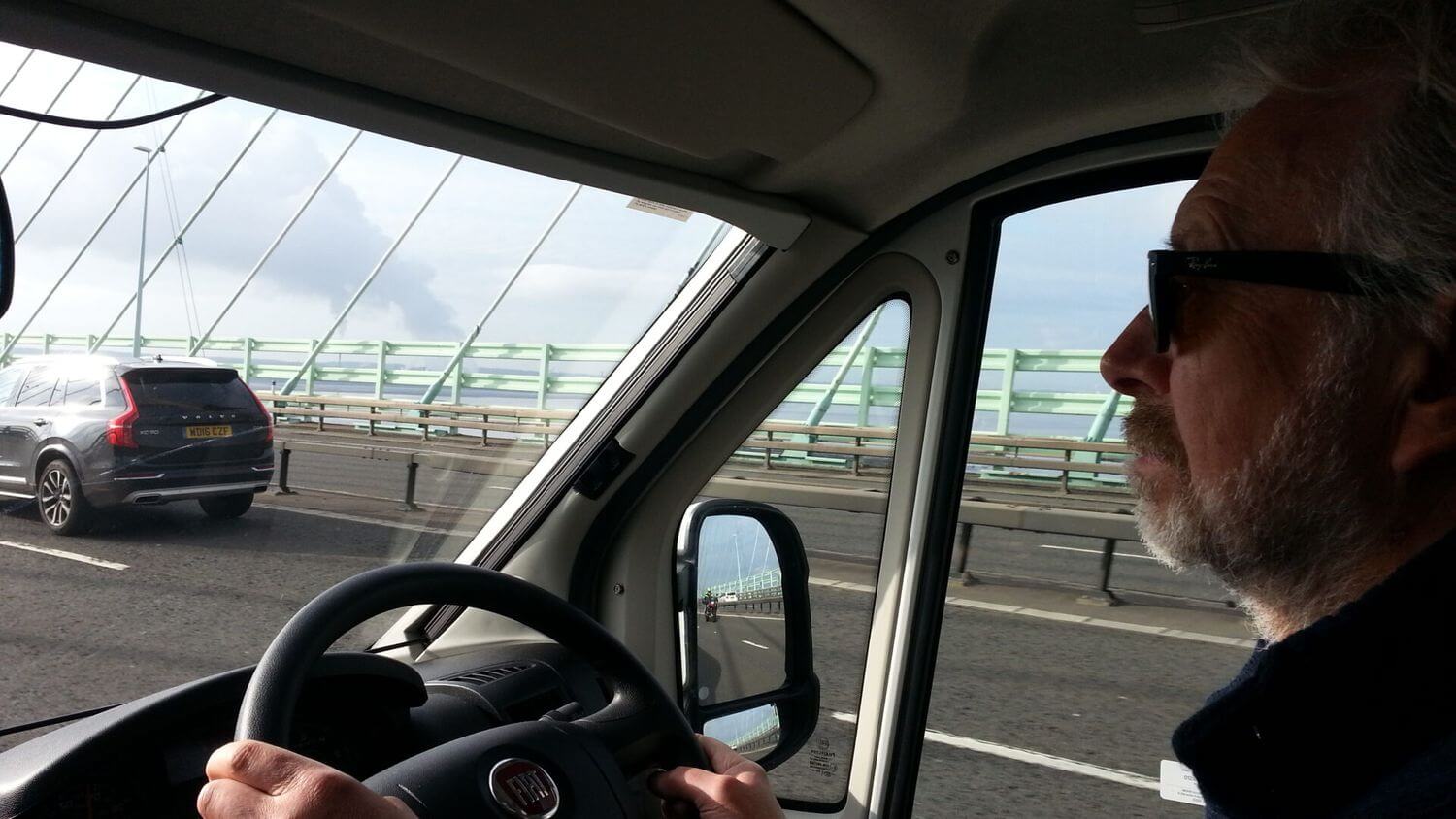 How did we find the motorhome itself?

One claim to fame about the Escape 614 is its excellent washroom, with large separate shower cubicle. Another good thing is the amazing amount of storage space. The last few feet of this ‘van are all garage and perfect for all manner of Gower-type toys, from paddleboards and bikes, to surfboards and barbecues.

Not having all the gear with us, we would have quickly exchanged that for a fixed rear bed in place of the drop down double over the lounge seats. This bed was comfortable and large for sure but we would not choose this layout again for the compromises it brings to access and headroom. Plus you can’t sit up in bed, have a cup of tea and look out the window, and isn’t that part of what it’s all about?

Overall a great week though and we can heartily recommend the Gower: spectacular, welcoming and motorhome friendly. And a place that passes the ultimate test: we took Scrabble with us but didn’t get to play it once… 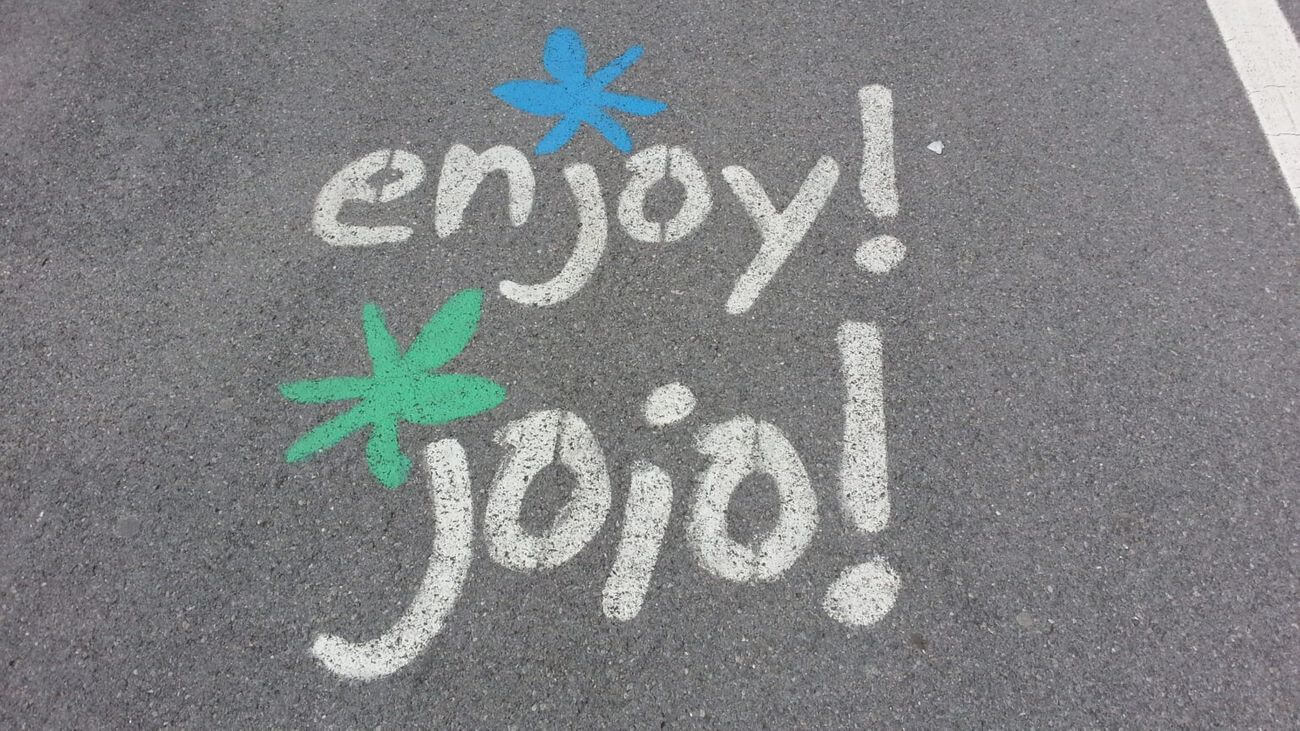 As they say in Wales, joio!